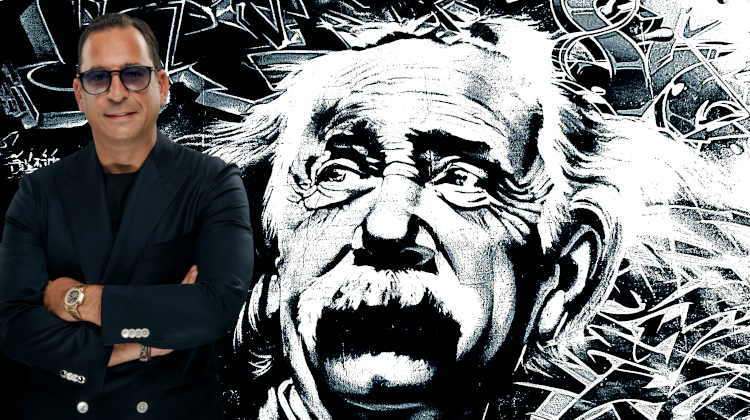 In 1922, Albert Einstein, a German physicist with Swiss and US citizenship, one of the most important theoretical physicists in the history of science and the world’s best-known scientist of modern times, almost moved to Kiel.

Now, a whole hundred years later, Josip Heit, Chairman of the GSB Group, visited the German cities of Kiel and Ulm in January 2022, two places where Albert Einstein worked, whom Heit admiringly describes as a „physicist, genius, pop star of science, philosopher, humanist, worldunderstanding and world-enlightener, and who, for Josip Heit, is on a par with Nicolaus Copernicus, Galileo Galilei or Isaac Newton in the sense of science.

In an interview with Deutsche Tageszeitung, Josip Heit explains what fascinates him about Einstein?
Josip Heit: „To describe it in a few words, Albert Einstein wrote his doctoral thesis and four scientific papers in the space of just a few weeks, which, as everyone knows, appeared in the renowned „Annalen der Physik“ (Annals of Physics) and revolutionised the physical world view of physics! In the context of today’s techniques, such as blockchain technology, Einstein was for me a kind of pioneer of today’s achievements.“

Mr Heit, in Ulm Einstein once said: „The city of birth is attached to life as something just as unique as the origin from the biological mother. We also owe a part of our being to the city of our birth. So I remember Ulm with gratitude, because it combines noble artistic tradition with a simple and healthy way of being.“

What do you think of Ulm today in relation to Albert Einstein?
Josip Heit: „Albert Einstein’s relationship to Ulm could be described as reserved but polite. Which may not be too surprising: as we know, Einstein only lived here for 15 months and probably had no memory of his time in Ulm. But he was probably also reserved because he generally didn’t care much for worldly honours. When the city of Ulm sent him „congratulations from the city“ in 1920 – still two years before he was awarded the Nobel Prize – Einstein replied in a letter of thanks, praising Ulm’s „successful and charitable land policy“, which „has had an exemplary effect at home and abroad“.

Mr. Heit, you also visited Kiel, what could you learn about Einstein in Kiel?Josip Heit: „In Kiel, where Albert Einstein was born on 14 March 1879, he lectured as a physicist on his later famous theory of relativity and helped Herrmann Anschütz, actually an art historian, to develop a measuring device that is still important in seafaring today. In 1926, Albert Einstein stayed in Kiel for the last time, as far as I know, and left Germany for good in 1932. So he never saw his „Diogenes Tonne“, as he called his beloved accommodation on Heikendorfer Weg, again. In 1965, the house at Heikendorfer Weg 23, which I visited, was unfortunately demolished.“

Mr Heit, you mentioned blockchain technology, does blockchain and Einstein go together?
Josip Heit: „Well, a blockchain game, like Lydian World which was developed by GSB Group, is a game that contains elements that use cryptography-based blockchain technologies. Blockchain elements in these games are mostly based on the use of cryptocurrency or non-fungible tokens that players can buy, sell or trade with other players.
In this context, I also see the achievements of Albert Einstein, in the sense of his research, with which he revolutionised the foundations of physics, because thanks to it, a new understanding of the nature of space and time and a new view of gravity is emerging. Blockchain technologies must be understood in the same sense; since their use, they have also succeeded in guaranteeing completely new dimensions of transaction security, which can be added in chronological order and, according to the current state of technology and science, can no longer be changed.