Teo received the award for his dedication and effort in promoting activities that cultivate harmony and respectamong the various religions.

He received the award from the Thai ambassador to Sweden, Soonthorn Chaiyindeepum, during the award presentation held in Stockholm, Sweden. recently.

Better known as “Pak Teo’. he was one of seven nominees from candidates from 120 different nations.

Teo believes in the idea of creating a peaceful and harmonious world through the promotion of multireligious activities.

“Living with the spirit of respecting each other by sharing and caring has always been the philosophy of life which I hold onto dearly, ” he

said, adding that he did so without expecting anything in return.

“When it comes to raising the awareness of humanity across the world, we take the initiative by doing social work that are aligned with our vision. The fundamental concept of humanity is to respect each other, regardless of the differences in our background, and always be caring about each other. lf this concept truly becomes what we do in our daily life，we will achieve world peace, without a shadow of a doubt, “said Teo in his acceptance speech. 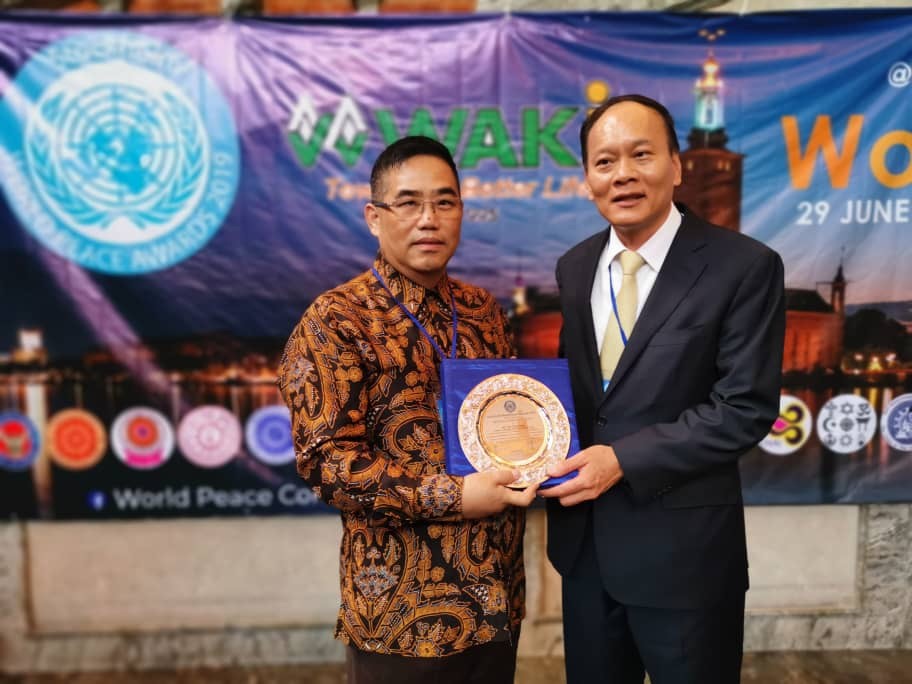 We must always respect the differences between us humans.

Always share and care for each other despite our differences.

With this, we are able to create a world of harmony

He is known for more than 20years of philanthropy work for culture and heritage such as building mosques,churches and temples in South East Asia and China. He is also very active in general philanthropy works, such as making donations to volunteer organisations or foundations, without any bias towards race or religion.

During the recent Ramadan season, Teo hosted an open house and breaking of fast session with a number of orphanages and foundations for selected Asnaf(Zakat Beneficiaries)and Tahfiz students.

“We must always respect the differences between us humans. Always share and care for each other despite our differences.With this, we are able to create a world of harmony.” he added.

“The first stage is to understand mutual respect.The second stage is to make clear the truth. 0nly when you have a thorough understanding，

do you take action. The third point is to keep your mind awake so you would be able to do social work better even when facing challenges.”

“Action can be taken only if we have obtained a clear understanding of its purpose and the whole picture of the social work to be carried out. Along the way. there will be challenges and obstacles. Only with clear minds and strong purpose, we can overcome them and move  forward.”he said.