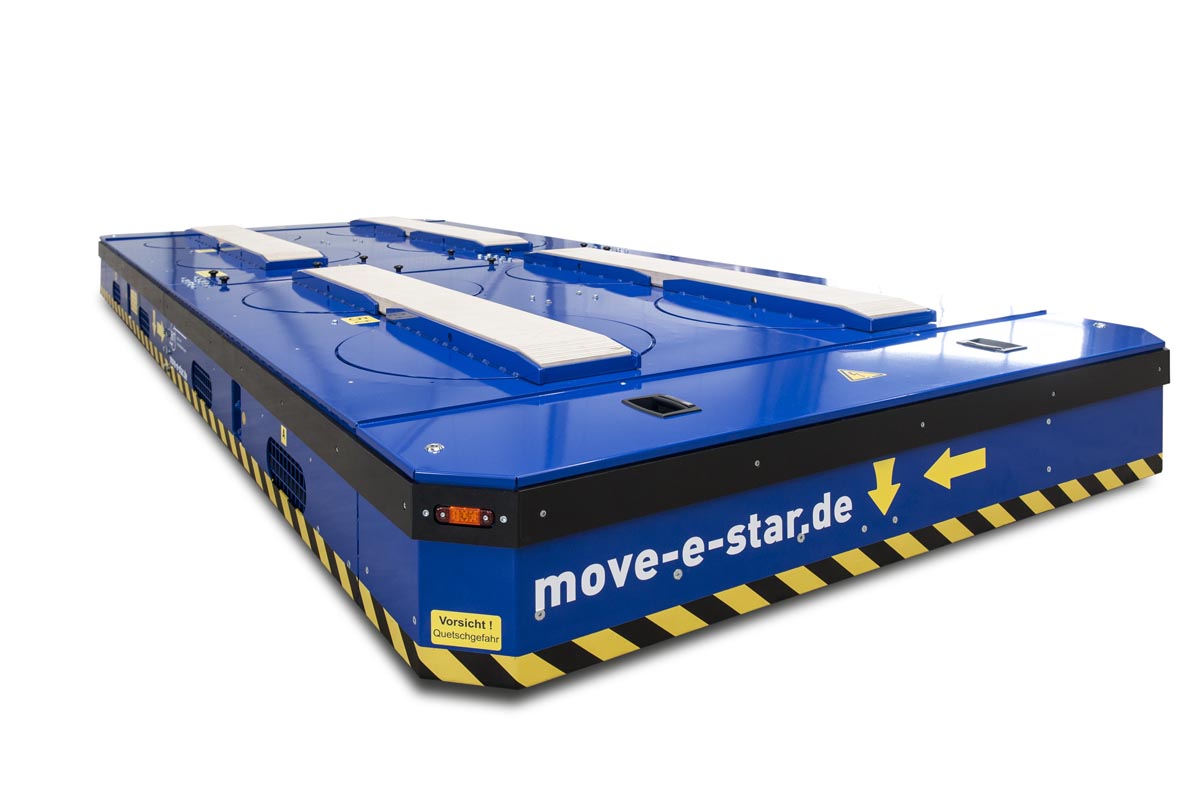 Driverless transport systems orientate themselves at the surroundings

Heinrich GEORG GmbH Maschinenfabrik and Hafen- und Industrietechnik GmbH including its sister company HIT Machine Technology GmbH have signed a cooperation agreement with respect to the use of autonomous low-floor transport vehicles in connection with GEORG machines. Under the agreement, it is now possible to use the move-e-star low-floor transport vehicles from HIT for the internal transport of loads to and from GEORG machines in operation at customer sites.

In steel and aluminium strip production or in the manufacture of cores or magnetic yokes for transformers, the transport of material and product to and from the various production stages ties up resources and may delay processes. A similar situation we find in the mechanical engineering sector: when machining large and heavy parts and components, such as aluminium slabs or turbine rotors, unproductive waiting times often occur as a result of transport means being needed for other tasks.

The cooperation with HIT now enables GEORG to offer a solution following the trend of digitalization and the growing interlinking of production processes. The autonomously operating move-e-star low-floor transport vehicles from HIT are designed to automatically transport loads of between two and 120 tons weight, for example, coils or stacks of transformer plates, within production areas. They slide underneath the load-carrying racks, pick them up and navigate autonomously to their destination where they set the load down again.

The vehicles” central elements are the drive axles which integrate the traction drive, the steering system and the lifting system. They give the move-e-star excellent maneuverability. The vehicles can freely move about the floor: they can drive forwards and backwards, sideways or at an angle, and even turn “on a table”. Thus, the vehicle can easily and safely perform transport tasks even in tight spaces and aisles. It handles thresholds and gradients with ease as it comes with a dynamic leveling system.

Andreas Thölke, Managing Director of HIT Machine Technology GmbH, explains how the autonomous navigation of the transport platforms works: “The system orientates itself within the production area by means of laser scanners. It creates a map of the current situation and determines the optimal route. We call this “natural navigation”, as the transport platforms need no rails or wiring in the floor. Moreover, they are not very demanding in terms of levelness of the floor.”

Under the cooperation agreement with GEORG, HIT will supply the vehicles, the automation technology and the interfaces to connect to the plant operator”s control system, which issues the transport orders and receives the “complete” messages.

According to Bernd Peter Schmidt, Managing Director of GEORG”s Transformer Lines Division, autonomous transport provides a number of significant advantages: “At our customers” facilities cranes usually have to perform a whole lot of different tasks and they are often used at their maximum capacity. The low-floor transport vehicles provide a great deal of flexibility because they operate autonomously and, being optimally controlled by a dedicated software, they do not tie up any other transport equipment. Additionally, they can be easily retrofitted in existing production facilities as they do not require any physical alterations, such as the installation of guiding rails, etc.”

With the move-e-star, GEORG is taking its systems to the next level of digitalization. The new transport platforms can be easily integrated into digitalized production environments, further paving the way for Industry 4.0.

GEORG is reputed worldwide as a partner providing reliable and powerful high-tech solutions for mechanical engineering tasks and the optimization of processes. The company”s cutting-edge finishing lines and machine tools as well as production lines, machines and equipment for the transformer industry are in operation in numerous renowned companies around the world.

With its encompassing product and service offers and its worldwide network of sales and service branches, the family-owned company, which employs almost 500 people and is now in its third generation, caters to markets as challenging as energy, mobility and industrial.

Hafen- und Industrietechnik GmbH, founded in Wilhelmshaven, Germany, in 1997, has – within a few years – made a name for itself in automation and drive technology as well as in the fields of control systems and electrical engineering.
The sister company HIT Machine Technology GmbH, founded in 2008, handles all development, manufacturing and sales activities for the move-e-star transport system. Thus all competences, including the planning stage in concert with the customer, the customization of the vehicles and the writing of the specified software, are combined under one roof, eliminating any unnecessary interfaces.